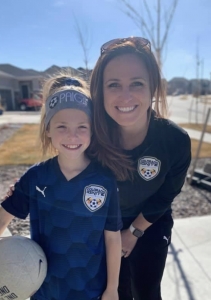 Kelly is a proud Colorado Native and grew up playing soccer for NASA (North Area Soccer Association) in Thornton, CO. She then went on to play at Metro State and LCCC in Cheyenne, WY while completing schooling for Dental Hygiene.

Kelly continued her soccer career by handing down her love for the game to the next generation by coaching. She also worked for another CO club as director of growth and development.

“Soccer has given so much to me and truly saved my life as a kid. I felt safe and loved with my teams growing up. I also loved the challenge that the game constantly gave me. I still can always find something to learn and take away. Bad days on the field teach us just as much as the good days, just as they do in life.”

Kelly and her husband live in Erie with their 2 daughters. Both girls can be found on the field playing soccer and on the rink playing ice hockey. 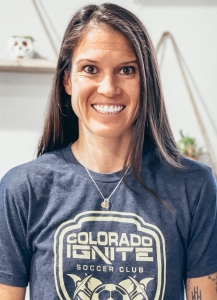 Ashley brings a diverse wealth of soccer knowledge from grassroots to professional. She has over 10 years of coaching and director experience in youth soccer. She has not only coached in Colorado, but in Arizona and Washington as well. Ashley is also involved with the Colorado Select program as the head coach for the 2004 girls age group.

Ashley has a Bachelors degree in Sports Management and a minor in Communications from Gonzaga University. Ashley played and started all four year at Gonzaga for the women’s soccer team. She is the third all time leading goal scorer for Gonzaga. She also played 3 seasons with the women’s Sounders semi-professional team in Seattle, WA.

Ashley is currently in the process of completing her USSF Youth A license, which is the highest youth license in the United States. We are proud to be one of the only clubs in the state who will have a female in this leadership role.

“I am excited to be joining the Colorado Ignite Family!”

Ashley lives here in Colorado with her wife and twins (boy and girl). You can still find her on the soccer field playing games and on the slopes skiing with her family and friends. 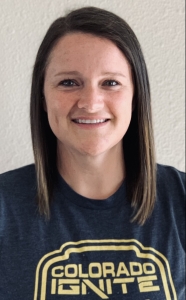 Courtney came to Colorado in 2017 from North Carolina.  She brings a wealth of not only administrative knowledge but club soccer knowledge as well.  Courtney has worked as both a Director of Coaching as well as on the operations side of a club.  She brings 3.5 years of Registrar expertise and is excited to bring new ideas to a new and growing club.

Courtney has a bachelor’s degree in Criminology and Sociology from Auburn University.  Courtney started her soccer career at University of North Carolina Charlotte and transferred to Auburn after her sophomore fall season.  She finished her remaining 2 years of eligibility on the Auburn Women’s Soccer Team.

Courtney and her fiancé live in Firestone with their son Carter and 2 dogs Jordan and Apollo.

Scroll to top
Get Your Fan Gear